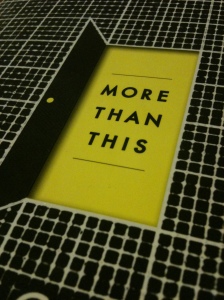 Two weeks ago, I finished reading ‘More Than This’, a young adult novel written by two-time Carnegie medal-winner Patrick Ness. And even though, I was initially quite dissatisfied with the ending to this book (I also didn’t love it quite as much as his ‘Chaos Walking’ trilogy), I have been haunted by it ever since.

The story opens with a boy drowning in the sea. He is sixteen, nearly seventeen, we’re told. We are reeled into the narrative with him, towards his inevitable and excruciating death; we witness his last choking breaths and the obliteration of his skull as it crashes against rocks. And then he wakes up. In hell. Or at least he thinks he’s in hell. He’s in his old house. In his old hometown. In England. A country he left for America eight years before.   A place he hates. Except that it’s not the England he remembers, because it looks like several years have past. And the streets are deserted. And the landscape dilapidated. In fact, it’s much worse.

Reading this book made me think about my own mortality, and about the town where I grew up. I never really liked living in Renfrew (for various reasons), but if I was trapped there on my own for all eternity I could feel happy in the knowledge that the local library has an impressive number of brand new YA and fantasty fiction novels that I haven’t perused yet, so at least I’d be OK for reading matter for a couple of years. There would also be no roving drug addicts eyeballing me whenever I left the house. Because of course they’d all be dead in this post-apocalyptic purgatory or hell or whatever I was in. (I’ve obviously not got the most vivid of imaginations, because the most hellish place I can imagine at the moment is one where I don’t have anything to read.)

None of Ness’ characters in this novel are clear cut heroes nor are they villians. They are simply people who have found life too hard to cope with. Through Seth, his teenage protagonist, he shows us a retrospective world populated by messed up teenagers with equally messed up parents and he poses questions such as ‘why is the world such a messed up place?’, and ‘why do people use and abuse and hurt others?’, and most importantly: ‘is there more to life than this?’  Then he nudges us towards discovering our own answers.

His words have also pushed me to think about the ways in which my goals and desires have often rendered me an outsider: I always seem to want vastly different things from most of the people I know. I’m vegan, a writer, and I’m gay – and although I didn’t choose my sexuality I certainly made a conscious decision not to keep it a secret. I’ve also always hankered after far more than marriage, kids and a nine-to-five job. And I can’t imagine ever putting my social life ahead of my health and fitness.

Because of these things, I’ve frequently been accused of being selfish, of having unrealistic expectations, and of living in a fantasy world. I choose to ignore those opinions though. Instead, I’d rather see myself as someone who has a lust for life and a hunger for knowledge and new experiences. And I’m not going to change my views on this any time soon nor will I apologise for having the gall to dream.

‘More Than This’ is one of those books that would be ruined if I said too much about the plot. So I won’t. But, if you like intense, thought-provoking and multi-layered narratives with a dollop of intrigue and a smidgeon of humour then I thoroughly recommend you acquire a copy of it, and as Seth would say, ‘go in swinging’.

1 thought on “More Than This”