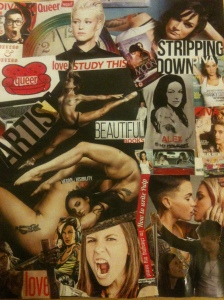 Yesterday I created a collage out of a pile of old ‘Diva’* magazines. I’ve called it ‘Self-Love-Hate’ because it mirrors the way I often feel about myself and my writing. It also represents the shifting internal homophobia that many lesbian women experience throughout different points in their lives.

I got the idea from Julia Cameron’s ‘Vein Of Gold: A Journey To Your Creative Heart’, which is a companion volume to her acclaimed self-help manual,‘The Artist’s Way’. First published in 1996, Cameron describes VOG as ‘a pilgrimage’, ‘a journey of healing’ and ‘a prescription for artful living’, and it includes advice on how to combat creative stumbling blocks as well as over a hundred inspiring and imaginative exercises which focus on ‘inner play’. (I have been working through this book for over five years now, and although it has produced several light bulb moments, I’ve sometimes found it to be a bit of a slog)

Anyway, yesterday’s cut-n-paste task appeared on page two-hundred-and-fifty-five in section six of the book which is entitled ‘The Kingdom Of The Relationship’ – the book is separated into seven sections each one dealing with a different aspect of creative restoration. Here, along with other recommendations on how to evade destructive interactions, it is suggested that you collage your most toxic creative relationship. This was initially a bit of a puzzle for me, because having read several of her other books I am more than familiar with her thoughts on how to eradicate the people she refers to as ‘crazy-makers’ and ‘creative monsters’; and I realised that after doing many of Cameron’s exercises (and attending one of her conferences in London last year) that I’ve successfully managed to ditch, diminish or diffuse all of the other negative influences in my life. So… the only person left was myself.

The thing is, I have had several small successes over the last few months: I’ve finally finished a collection of short stories and a novella, as well as receiving a hundred percent on four out of five of the assignments related to the distance learning crime fiction course I’ve been doing. But often these tiny wins are only enough to stave off doubts for a few hours or (if I’m lucky) days; and then I’m back to storming through the house like a tasmanian devil, threatening to destroy every word count and manuscript in my path. And I don’t know why I’m like this. Or when it started. (I suspect it’s been a gradual disintegration of confidence over the years that one day suddenly snowballed.) There’s no point speculating though. It only leads to procrastination and then frustration because I could have been using that wasted time to solve a plot-orientated issue.

It’s no surprise to me (or to Antonia who once received a rather risque Diva-inspired valentines collage from me) that my hotch-potch of clippings included naked ladies; there were also three pictures of Wentworth’s Nicole Da Silva (aka Frankie Doyle) alongside Orange Is The New Black’s Lea Delaria (Big Boo) and Laura Prepon (Alex). The word ‘queer’ appeared three times in different fonts as did the word ‘vegan’. The collage wasn’t intended to be a masterpiece. I simply cut things out willy nilly as I skimmed through the pages, so any subtexts that may have arisen are accidents. And in retrospect I think it’s far too cluttered, and I could have did without captions such as ‘study this’ and ‘I’m changing my name’ and ‘how to write pulp’. It was a worthwhile exercise though, and I enjoyed doing it. But I’m still waiting for the ‘clarity and relief’ that Cameron claimed came to her when she worked on this same theme.

I asked Antonia what she thought of my new magnum opus and how it fared in comparison to my previous collages. She simply shrugged and said: ‘I don’t know, hen, they all look the same to me.’

*Diva is popular UK magazine about lesbian life and style