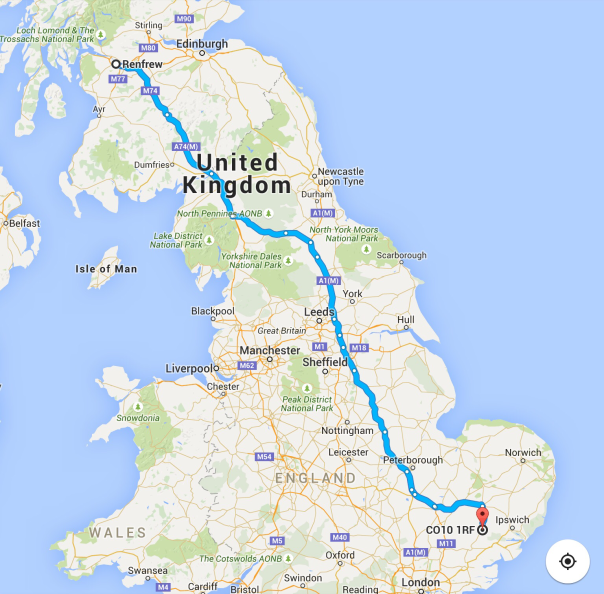 Today is my thirty-seventh birthday and the first anniversary of my residency in England; it’s also my final post for this blog.

Right from the start, I’d always intended for Bean Love to be a year long project, so I’m really happy to have gone the distance with it, even if I did go a little off topic a lot of the time.

Back in the summer of 2014, when I decided to chronicle my house move from Renfrew’s concrete jungle to Sudbury’s soporific pastures, I knew that I would also be embarking on an intense psychological journey that would not only catapult me, as a disabled person, into a greater state of independence, but it would push me to diversify my writing even further as well as making or breaking my relationship with Antonia. I wanted to record my journey in a way that I could share it with people back home who I was unlikely to see for a while, which is why I chose to make the blog public. I’d also just finished reading Alison Bechdel’s ‘The Complete Dykes To Watch Out For’, and it reminded me of some of my friends and what I call the ‘Bean Scene’, and I was tickled by the idea of writing about queer culture and the way we gay ladies often perpetuate lesbian stereotypes ourselves.

Antonia, the wee delicate flower that she is (or was) said that moving to Glasgow was a ‘culture shock’ for her: she’d never before been exposed to the grittiness of West Coast living, nor had she encountered off-licenses with electronically-tagged Buckfast bottles; she’d also never heard anyone refer to their friend as a ‘cunt’ by way of friendly greeting and, as a result, she gained a whole new vocabulary in the three and a half years she spent there.

But was it a culture shock for me? Well, yes and no.

Sudbury is different from both Renfrew and Glasgow in lots of subtle ways: for instance, a garden here is not a garden unless it is at least half an acre, and most people talk ‘proper’ English and can’t understand half of what I say; there aren’t many buses in Sudbury either, because not many people need to use the bus – Antonia says most folk in this town wouldn’t even consider having less than two cars per household and that her family (of six) once had half a dozen cars in the driveway, and that was when two of them couldn’t even drive. Then there’s the ladies at the tennis club, who were terribly offended by the whole Scottish independence thing because they couldn’t understand why ‘but why?!’ Scottish people wouldn’t want to be in the United Kingdom. Of course, everyone is Sudbury is perfectly polite and nice to me – at least to my face – and on one of the two occasions I’ve heard someone shouting in the street here, one of the culprits sounded like they were from Govan.

Much like Renfrew, there’s not a big bean scene in Sudbury, nor is there a vegan one. But I know we’re not the only queers or meat avoiders in the village because I’ve seen a few lady-couples tramping around town in their wellies and Barbour jackets; and after recently joining the Suffolk Vegan group on Facebook, I’ve discovered there are a few fellow herbivores hiding in plain sight in Gainsborough Street’s ‘Niche Café’ behind their super salads. There’s also not much going on in terms of literary events and networks; and after my own attempt to start up the ‘Breakfast Writers’ Club’ failed, I joined the over fifty-five’s group at the library (and so far no-one has complained that I’m nearly two decades too young).

If my recent trip back to Scotland has taught me one thing it’s this: I am incredibly lucky to have lived in a place that allowed me easy access to the various diverse communities that helped shape the person I am today; and this, in turn, has prompted me to think about going back more often, as well as making me want to put more effort into venturing out into London and some of the other East Anglian towns in search of my tribe.

Overall, I’m stepping up my game in the coming year: I’ve been invited to an interview in East Acton with prison arts organisation the Koestler Trust, and I’ve posted my application for an eleven-week course aimed advanced writers in Covent Garden; I’ve also just signed the lease on my apartment for another year. And whilst, this may be my last post on this blog, I’m not saying I’ll never blog again, nor am I saying this is the last you’ll hear of Bean Love… a wise friend recently suggested that I should consider rewriting it as a work of fiction… and, you know what, I just might do that…