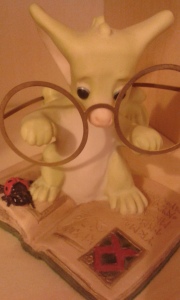 Yesterday I got a hundred percent for assignment two of my crime fiction writing course. Now, I don’t think I’ve ever scored a hundred percent on a test paper, and I probably never will again; and although I’m incredibly pleased (so pleased I almost burst into tears when I read my results), I’m still trying to work out exactly how the percentages were divided up, and how anyone can get a hundred percent for a writing assignment which included open-ended questions such as: ‘in no more than fifty words write the opening to a crime story that will make the reader want to know more’.

It’s funny, because often when people find out about my brain injury they eyeball me suspiciously then make sweeping statements like: ‘oh, but you’re a hundred percent now’, or ‘you must have made a hundred percent recovery because you look fine to me’; or my favourite one: ‘Well, thank your lucky stars you’re back to normal now’. I’m never really sure how to respond to these people. Because I do feel ‘fine’. Most of the time. I’m physically fitter than most people I know, and probably more intelligent than a few of them, and all in all I’m very happy with my lot. But I find it difficult not to constantly compare myself to folk my own age, and this often leads me to thinking that I’m a failure and an embarrassment because I haven’t got a nine-to-five job or a mortgage or, more importantly to me, a recent book deal. And even when Antonia reminds me that ‘normal’ people don’t get into a lot of the situations I do on a daily basis – they don’t sleep for fourteen hours two nights in a row, or mistake wardrobe doors for toilet ones; they don’t forget the name of their current partner, what he or she looks like, or whether or not they’ve just had sex five minutes ago; they don’t spend over an hour looking for the way back to their own street like I did the other day – it doesn’t stop me from giving myself a hard time.

Years ago, when I sat my Standard Grades at high school, my maths teacher took me aside and told me he was amazed that I had managed to get the highest mark in my year for the General (intermediate) exam – and the reason it was so amazing wasn’t even that I’d outranked students in higher classes, but that I’d also FAILED the Foundation (lowest level) maths exam. I don’t know how I managed it: I couldn’t see any logical explanation for it and neither could the teacher. But I do wonder what would have happened if I’d been allowed to sit the Credit (advanced level)… would I have scraped a pass? Could I have gone on and sat a Higher exam in maths the following year if I’d wanted? That really would have been a miracle though, seeing as I recently had to ask my friend, Sophie AKA the original bean-cruncher, what shape a rhombus was.

(Sophie is one of these ridiculously brainy people who only this week bought a raspberry pi – not the edible kind – and was teaching herself a random computer programming language ‘just for fun’ on her day off; she once got one-hundred-and-five percent in an algebra test – and, no, there was no marking error.)

I’ve always preferred learning from books or instructional CDs at my own pace, which is why I chose to do a home study course rather than sitting in a physical classroom. It’s better for me to be completely in control of when, where and for how long I spend reading, writing or listening – especially since my concentration span is like a pendulum that allows me to be wired to a subject for two hours at a time one day and then two minutes the next.

And I constantly think about returning to uni. I fancy going back and doing a BA in Creative Writing or in English Language or even just finally doing that phd I keep deferring. I could even do it long distance which would save me from getting lost on campus. But I’m scared of having to remember huge chunks of information that I’ll later have to spew onto an exam paper or debate with a board that is judging my thesis. And then there’s all the money that would be wasted on fees if I were to drop out.

So I’m not a hundred percent sure where this mystery story is going, never mind what I’ll be doing after I’ve finished assignment five and the final paper. I may or may not save up and do a similar course. Maybe Romance? Or Historical fiction? Or Sci-fi? Or perhaps I’ll just ask Sophie to build me a time machine so that I can go back to nineteen-ninety-four and retake those maths tests… stranger things have happened…