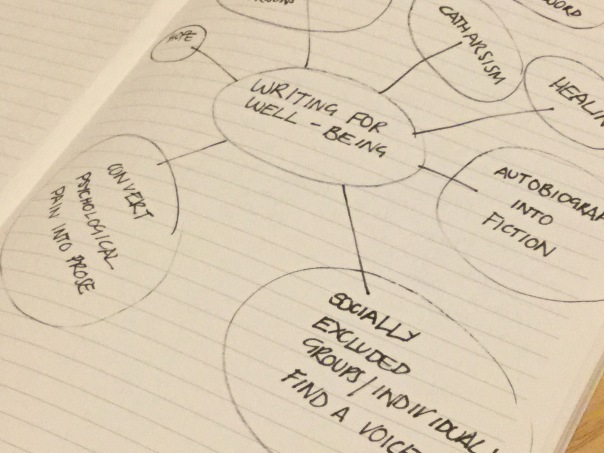 It’s been almost a year since I left my post as writer-in-residence at Polmont Young Offender’s Institution, but recently I keep thinking about prisons and similar places where people are isolated from society and the arts, and this leads me to wonder how my ex-students are getting on.  Most of the young men I worked with, during my two year stint, are in their early twenties now, and will either have received parole or moved on to complete their sentences inside adult correctional facilities; and with any luck they’re all behaving themselves.

Also, now that I’ve completed my diploma in Crime Fiction, I find myself asking ‘What’s next?’: it’s in my nature to constantly be on the look out for new challenges and learning opportunities, and once again I’m contemplating when, where and whether I should make my return as a practitioner of writing for wellbeing.

My first foray into the facilitating of therapeutic writing workshops was in November 2004: it was the same year that I published my autobiography (http://www.amazon.co.uk/Cracked-Recovering-After-Traumatic-Injury/dp/1843100657) and began studying a creative writing masters degree at Glasgow University; and despite having no previous experience in counselling  or teacher training, my old college lecturer, Dave Manderson, asked if I’d be interested in running a class aimed specifically at adults with mental health problems. I also had no idea how to go about structuring or running a workshop back then, but I knew I wanted to help – not least of all because Dave had helped set me on the path to becoming the writer I am today.  (Back in 1993, when I was in a fifteen-year-old inmate in an adolescent psychiatry unit, no-one once  suggested I might try writing about my problems or the traumas that I’d suffered – it was Dave, whose creative writing class I went to five years later, who insisted that I tell my story.)  And I believed the very least I could do was help him to help others find an outlet for their psychological pain.

The therapeutic writing course was a pilot venture arranged between Reid Kerr College in Paisley and the town’s Charleston Centre, and it was scheduled to last six weeks; but on the last day as I was leaving, one of the students piped up: ‘When do we start back after christmas?’  In the end, it ran for more than three years, and I’m positive I learnt just as much from my students as they did from me.

Since then, I have always felt that part of my vocation was to help others – primarily underdogs and people who are in some way socially excluded – to find their own voice on the page; and over the last twelve and a half years, I’ve facilitated writing workshops with an array of culturally diverse groups including LGBT Youth, the Renfrewshire Brain Injury Project and Paisley’s Disability Resource Centre.  My emphasis when working with these vulnerable groups has always been on using the written word as a tool for healing – I frequently use humour to do this – and I can only hope that most of my students have benefited in some way from the exercises I’ve set them.

I feel very strongly that the arts should be accessible to everyone, no matter what their background or ability is.  And it is my personal opinion that writing for cathartic reasons not only helps assuage negative emotions such as anger, jealousy and depression.  Ultimately, this helps reduce crime too, which is why I’m now looking into the possibility of becoming a mentor for talented ex-prisoners who have expressed a serious interest in pursuing a writing career.